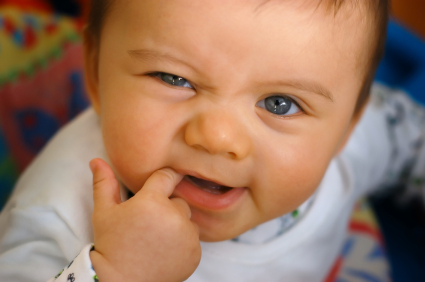 Teething is such a pain! Natural Relief With Homeopathy

While teething is a natural process it can often be very distressful and exhausting for both the baby and the parents.

Some babies will sail through teething with little or no difficulty while others will struggle with every painful tooth eruption which can often be accompanied by a myriad of other symptoms.

For anyone who has listened to their baby screaming in pain, homeopathy is a welcomed effective relief against the pain and discomfort of teething.  In addition to helping with the pain, it can also help improve your child’s vitality, mood and sleep.

Babies generally cut their first teeth between 4 to 6 months and the process occurs at intervals until age 2 or 3 when all 20 milk teeth are through.  The first teeth to appear are the lower centre teeth, followed by the upper front pair at around 7 months.  By the end of the first year 6-8 teeth are through, with canine teeth appearing between 15-18 months followed by the back molars.

Symptoms of teething can include red swollen cheeks and gums, increased drooling, biting, refusing to eat, irritability, crying and sleeplessness.  Prolonged stress of teething may lower resistance to infection and there may be other signs that the baby is struggling with constant runny noses, colds that won’t go or just knowing your baby is out of sorts.

When prescribing a remedy for a teething child, in addition to physical symptoms, how the child reacts during teething is very important. There are many remedies suitable for teething and here are a few examples.

The baby needing Chamomilla is extremely irritable, cranky and cross during teething. They are so sensitive to the pain that very little is tolerated. They demand to be held and carried around but after a while this no longer comforts.  When held the parent will complain that they like to be carried or rocked quite hard and fast and if they stop the baby starts crying, whining or screaming.  They demand things and then will throw them across the room.  They can also hit out in anger.  The face is flushed one side, stools are loose and greenish, they are usually worse in the evening, they sweat easily and dislike feeling hot.   Both baby and parents are extremely distressed.  As one mum described the situation –  “I would happily put her up on ebay as she is driving us to distraction”…. (thankfully all is good now.. 🙂 )

The child needing Pulsatilla is the opposite of Chamomilla in that they often illicit a more sympathetic, gentle response.  When teething they are whingy, weepy and clingy.  They can be comforted by slow gentle rocking and being held and comforted.  Symptoms are changeable whether it is the mood, nappies or runny nose. They appear to have comfort from a cold ring and being out in the fresh air.  Their lips and mouth are dry yet they are not very thirsty.

This remedy is often considered when teething is slow, difficult and teething starts later than would be expected.    They chew their gums especially during sleep, there is a lot of pain long before the tooth cuts and the whole process feels like it is going on for ever. They tend to sweat during sleep, have a ravenous appetite, gain weight easily, are constipated and can be quietened quickly enough when picked up.  They are generally quite contented babies but when unwell can be stubborn.