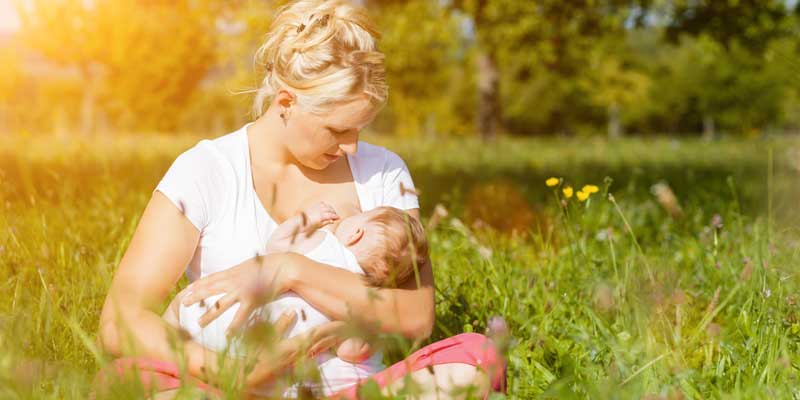 Coping with persistent or recurrent clogged, (plugged or blocked) milk ducts can be hell.

Nursing her second baby, Rebecca’s was now experiencing blocked ducts for the last 3 months and the usual tried and tested solutions were not helping.  The clogged ducts would occur on both breasts in various places on a daily basis and the pain was excruciating.

She was a positive person and didn’t want to give up breastfeeding as she had an abundant supply of milk but at times she broke down and felt like she couldn’t do it anymore. With a drive and determination not to give up though, she continued to look at what else she could try.

She tried exclusively pumping and not nursing but would still get them.

She tried pumping after a feed to empty the breasts. They still reoccurred.

She changed nursing positions, tried acupuncture and made sure she was well hydrated. She also supported her immune system with Vitamin C, Vitamin D and sunflower Lecithin but that didn’t help either.  Her bloods were checked for any nutritional deficiency also, but her test results came back clear too.

This was not a new complaint for Rebecca as it had happened when breastfeeding her first-born. That resolved more quickly with an iron supplement but was not effective a second time. In fact, her symptoms were much worse this time around.

One other symptom she noted was that her baby had thrush before the clogged ducts started and both mam and baby were treated homeopathically at that time.

Rebecca has kindly agreed to share her experience below.

“I found Eileen after a desperate Google search one night trying to figure out why I kept getting re-occurring clogged milk ducts from nursing my baby. I was getting a clogged duct every 24-48 hours!

As I live in the USA, our consultation took place via Skype. From the beginning, I finally felt heard!

I sought so many other types of help before Eileen and no other person/Doctor bothered to really take the time to listen to my whole story and try to fix my issue.

I remember telling my husband after my first meeting with Eileen that I finally found it! Someone is actually going to try to help me, I was so happy.

This was my second baby and I had the same experience with my firstborn. An iron supplement resolved it then but with my second child, it wasn’t addressing the problem at all.

The only common denominator I had for both my kids that I could think of was thrush so I kept treating it from that angle.

After some trial and “error” (I wouldn’t really say ‘error’ but more of trying to figure out the best matching remedy for me), we found one that really helped – Belladonna! It was like a knight in shining armour as it took away the clogged ducts pain! It was like I was taking an over the counter pain medication. We also used Phytolacca at a different stage of the healing process and that brought great relief too.

During the course of our treatment, an old rash that I had when I was 30 weeks pregnant with my daughter re-appeared on my leg. At that time, I saw a doctor and a dermatologist and was prescribed a steroid cream on both occasions, but I had a bad allergic reaction each time.

What I understood from these old symptoms recurring was that my body was responding so well to the remedies and was trying to tell us what it needed next.  I then progressed to Sulphur to clear this rash. My clogged ducts slowly started to space out and became less frequent until they were gone.

My experience with Eileen was phenomenal in that she sought to really help me. We were able to find some remedies that really helped relieve my pain and resolve my issues.

Thank you, Eileen, for everything! I really appreciate all that you did for me and all that you do to help others heal!”
Rebecca, Arizona USA

If you are struggling with clogged milk ducts, mastitis, breastfeeding or post-natal issues and would like to make an appointment, you can email me or give me a call on +353 (0) 86 089 1037. I offer consultations in Dublin 2, Dublin 12 or online via Video Call.